Written by Administrator Published on February 6, 2022 in Categories Types of Dog 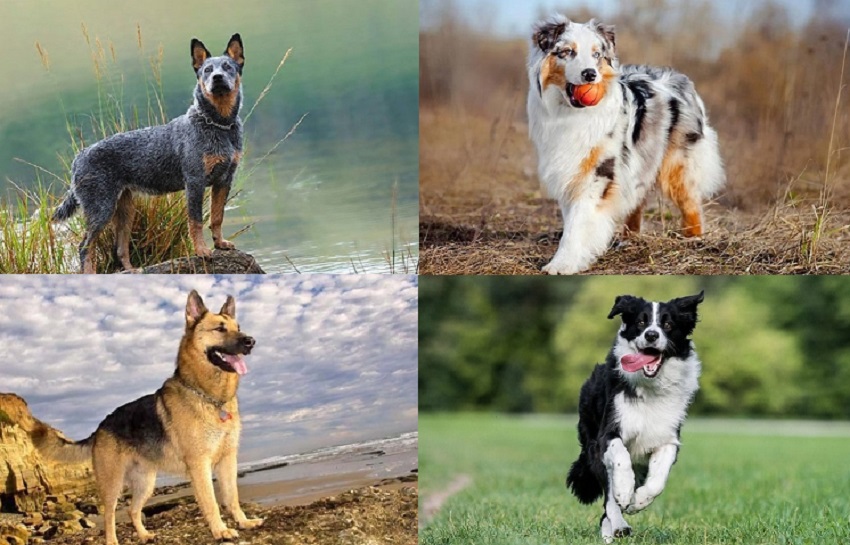 Herding breeds are generally considered to be hardy, good with kids, and highly intelligent. They’re also social animals that enjoy group activities and have a lot of fun playing together. If you’re looking for a pet that will make an excellent family companion, herding breeds are the way to go.

Australian Cattle Dogs are born white with whatever face and/or body patches they will have in later life. As ACD pups age, their blue or red coloring gradually emerges. The correct Australian Cattle Dog coat is what is known as a “double coat”. The short, straight outer coat is relatively harsh, while the undercoat is short and dense. Australian Cattle Dogs are not year-round shedders; they shed the dense undercoat one to two times a year for a week or two at a time. Although ACDs are born with tails, the tail is often docked, especially in ACDs working on ranches.

The Australian Cattle Dog is a very active breed, that needs lots of mental stimulation. The ACD was bred to work with people – therefore they have a strong desire to go everywhere with their special person. Because the Australian Cattle Dog is an active breed, a firm commitment must be made to exercise, especially when young. Obedience training is also highly recommended because of their intelligence and sometimes stubborn natures. Because of their intelligence and athleticism, ACDs are also excellent dogs for flyball, agility, and frisbee competitions.

Australian Shepherds are commonly known as Aussies (not to be confused with Australian Cattle Dogs). The Australian Shepherd is not an Australian breed but came to America by way of Australia. During the 1800s the Basque people of Europe settled in Australia, bringing with them their sheep and sheepdogs. Shortly thereafter, many of these shepherds relocated to the western United States, again, complete with dogs and sheep. American shepherds naturally dubbed their dogs “Australian Shepherds”, since that was their immediate past residence.

Aussies are athletic dogs of medium size and bone, lithe, agile, and slightly longer than tall. It is muscular and powerful enough to work all day, without sacrificing the speed and agility necessary to cope with bolting sheep. Its gait is free and easy, and it must be able to change direction or speed instantly. Its coat is weather-resistant and double, with the outer coat of medium texture and length, straight to wavy, and the undercoat varying in quantity according to climate. Its expression is keen, intelligent, and eager.

The Aussie coat is usually remarked on immediately because of its striking coloration. Aussies come in 4 colors: blue merle, black tri, red merle, or red tri, all with or without white and/or tan trim. Eye color may be brown, blue, amber, or any combination Aussies are born with tails, but they are commonly docked at birth. Some Aussies are born without tails and are called natural bobs. The height for males usually ranges between 20-23 inches and 18-21 inches for females. Both sexes usually weigh between 40 and 75 lbs.

The Australian Shepherd is bold, alert, confident, independent, smart, and responsive. It has the stamina to herd all day, and the brains to outsmart a flock of uncooperative sheep. If it doesn’t get a chance to exercise and challenge its strongly developed mental and physical activities, it is apt to become frustrated and difficult to live with. With proper exercise, it is a loyal, utterly devoted, and obedient companion. It is reserved with strangers. It may try to herd children and small animals. Dogs from working strains are more energetic and more difficult to keep as non-working pets. Aussies typically excel at any type of performance events such as obedience, flyball, agility, and frisbee. They have also made excellent Search and Rescue dogs and service dogs.

Aussies are typically a healthy breed, with lifespans of 12 – 14 years. Health problems include CEA (Collie Eye Anomaly), and hip dysplasia. They may be sensitive to ivermectin (the ingredient in HeartGuard), so Interceptor is recommended for heartworm prevention. Merles should not be bred to merles because a homozygous merle is lethal or detrimental to health (deafness, blindness, internal organ problems). A homozygous merle can be identified by having excessive white (outside of the trim area), especially around ears and eyes. Never buy an Aussie whose head is entirely white.

Belgian Shepherds were developed in Belgian and were all-purpose farm and herding dogs. There are four recognized varieties – the Groenendael (called Sheepdog in the US), the Tervuren, the Malinois, and the Laekenois. The varieties are anatomically identical but differ in hair texture, hair length, and colors.

The Belgian Shepherd Dog is an elegant, well-proportioned, medium-sized, square dog that gives an impression of elegance. They are a hardy breed, accustomed to living in the open air and built to resist inclement weather and the atmospheric changes so frequent in the Belgian climate.

The Belgian Shepherd is an enthusiastic and remarkably quick dog for his size. He shows a natural tendency to be in motion. The Belgian was developed for endurance. He must be able to move and tend the flock all day and to guard it against all invaders. The Belgian Shepherd Dog is usually in motion and is capable of working livestock all day. Because he was developed as a herding dog, and because of his exuberant temperament, he tends to move in circles around his owner rather than in a straight line.

In addition to his inborn ability as guardian of the flocks, he is an exceptional watchdog and a tenacious and brave defender of his master and family. He is vigilant and highly responsive to his owner’s direction. He is alert, intelligent, and inquisitive. While he is firmly loyal to those he knows and loves, he typically exhibits reserve with strangers. He can be very possessive of his family. Because of the Belgian’s trainability and athleticism, they often excel at competitive sports such as obedience, agility, flyball, and tracking. Many Belgians also work as police dogs and Search and Rescue dogs. Belgians are considered high-energy dogs.

Belgians are moderate to large-sized dogs, with males typically weighing somewhere between 50 and 70 lbs and females between 40 and 60 lbs. The desirable size for males is 23″ — 26″, while for females, it is 21″ — 24″. The males are typically more impressive in appearance than the females.

Belgians are a double-coated breed, with very dense undercoats. For the Groenendael and Tervueren, the hair is short on the head, the exterior face of the ears, and the lower part of the legs, except on the back of the forelegs, from the elbows to the pasterns, which are garnished by long hairs called feathering. The hair is long and straight over the rest of the body and longer and more abundant around the neck and on the breast, where it forms a collarette and frill. The opening of the ear is protected by tufted hairs. The hair from the base of the ear is raised back and frames the head. The thighs are covered with very long and abundant hair, which forms culottes. The tall is garnished with abundant hair, forming a plume.

For the Malinois, the hair should be short on the head, the exterior of the ears, and the lower parts of the legs. Short on the rest of the body, thicker on the tail and around the neck, where it forms a slight collarette beginning at the base of the ear and extending to the throat. In addition, the hindquarters should be fringed with longer hair. The coat should be thick, close and of good firm texture with a woolly undercoat. The coat should conform to the body without standing out or hanging down. The distribution of hair on the tail simulates an ear of wheat.

For the Laekenois, the hair is rough and of a harsh state, which appears disorderly. The length of the hair is noticeably the same on all parts of the body. The length is approximately two-and-a-half inches (six centimeters). The hair around the eyes and the hair garnishing the muzzle is not excessive. The existence of a hard, rough beard and mustache on the muzzle are mandatory. The tail does not form a plume.

The Border Collie is one of the world’s premier herding dogs. The Border Collie is a wonderful dog, but they are not a dog for everyone being both very smart and very active. Border Collies are best recognized as black and white dogs, but they come in many sizes and colors, black/red/white, blue merle, red merle, mostly white, tan, and black. They range from 30 to 60 pounds and can be short medium or long hair. The medium and long usually have an undercoat.

The Border Collie is often split into “working” or “show” lines. A Border Collie from the correct source can be a charming pet, but dogs from a strong working line can become very frustrated or destructive if they find themselves in an environment where there is nothing for them too. Although Border Collies from show lines have a diluted work ethic, this marvelous dog is usually quite happy to be a loving pet, but he will need plenty of exercises and preferably some occupation for his very able brain.

The first impression of a German Shepherd Dog (GSD) should be that of a strong, agile, well-muscled animal, alert, and full of life. It is well balanced, with harmonious development of forequarter and hindquarter. The dog is longer than tall, deep-bodied, and presents an outline of smooth curves rather than angles. It looks substantial and not spindly, giving the impression, both at rest and in motion, of muscular fitness and nimbleness without any look of clumsiness or soft living.

German Shepherds are large dogs, with the desired height for males at the top of the highest point of the shoulder blade being 24 to 26 inches and 22 to 24 inches for bitches. Many German Shepherds from working lines exceed these height standards.

German Shepherd Dogs, are often split into working and show lines. The working lines tend to have more drive, be larger and need more experienced homes. The show lines of Shepherds tend to have softer temperaments and be more laid back. Both lines should be highly intelligent, versatile, loyal, moderately active, and protective if needed. It is normal for GSDs to be aloof, one-person or one-family dogs who are naturally suspicious of strangers. Some are more outgoing and friendly than others, but they should never be dangerous or threatening to the public.

You can’t always control what happens to you, but you can choose how you react. By reading this blog post, you have learned the importance of managing your herd and the role that Herding Breeds plays in business today. By choosing to become a Herder, you are making a statement about your company’s ability to adapt and grow. With these three steps outlined in this blog post, your company will be well on its way to success!